How to Test Your Core Muscles

So much more, though, is affected by your pregnancy and delivery than just your nether-region. Think of it this way: you can’t train for a half-marathon by just doing Kegels, right? And if you’ve ever strained your back or injured your shoulder and tried to go for a run, you know that running requires a whole lot more of your body than a healthy pair of legs and an intact nether-region.

You need a well-functioning, strong core in order to run without feeling like a bowl of noodles. During pregnancy and delivery your core was stretched (and in some cases partially torn or involved in a surgery), and it no longer functions the way it used to.

Fix your core before you start running.

Taking an extra few weeks to start out right will pay big dividends, even early on.

Lots of women say it takes months to feel like a real runner again after giving birth, and that’s because of a combination of muscle weakness and altered movement patterns. Your muscles aren’t working together the way they used to, and that makes it feel like you’re running in somebody else’s body.

If you don’t re-work your core from the inside out, it can take months for you to establish substitution patterns in your body’s attempt to mimic the way you used to move. If you start working on your core right away, you’ll be able to feel like yourself again a lot sooner, you’ll protect your body from injuries, and your performance will be much better.

Take the Sahrmann core test 1,2 (video below) when:

You’ll find running progressions (one for running with a stroller and one for solo running) in Healthy and Quick & Everything Fit: A Step-by-Step Guide to Exercise After Pregnancy.

You can make this a more rigorous test and more of an exact science by using a Chattanooga Stabilizer Pressure Biofeedback®.

It’s basically a fancy blood pressure cuff pumped up to 40mm Hg. When you place the cuff under the small of your back, it will detect the slightest amount of rocking if you’re not stabilizing well enough during the test. You’ll try to keep the needle from going more than 42 or lower than 38 as you do the test. The Chattanooga Stabilizer Pressure Biofeedback® (or a $10 blood pressure cuff) is also a great way to check your core drill exercises on a regular basis to make sure you’re getting the most out of your workout. 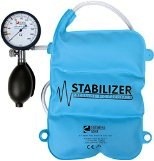